Another book I havnt read: Great Properties of Country Victoria, published in 2015, mostly #VictorianMansions you might see in Hawthorn or Caulfield but in the #WesternDistrict. Don’t know them terribly well because very hard to visit !

Some of the most interesting Edwardian era houses are out there, and #Dalvui near #Terang is one, with a tragic story to boot. Inherited in 1880 by son of original pastoralist Neil Black also called Neil, he commissioned an extensive garden from #WilliamGuilfoyle in 1898, and in 1908 commissioned this house from #UssherAndKemp, who had practically invented the Edwardian style as practiced in Melb in the late 1890s, but this example is showing the influence of the #TudorRevival, which would go on to be dominant in the 20s, but here is a bit #ArtsAndCraftsStyle too, very picturesque. The year it was finished, Neil sailed off the England to collect his bride to be, but the Waratah was lost at sea, and never found.

The Palmer family had it for the next 60 years, nurturing and improving the garden, often open for charity events too. The current owners are Peter and Pam Habersberger, who run 200 Angus cows, but he’s a cardiac surgeon, so, you know, $$, but nice to see that they consider themselves custodians, and it’s still open sometimes, and for open air plays too. 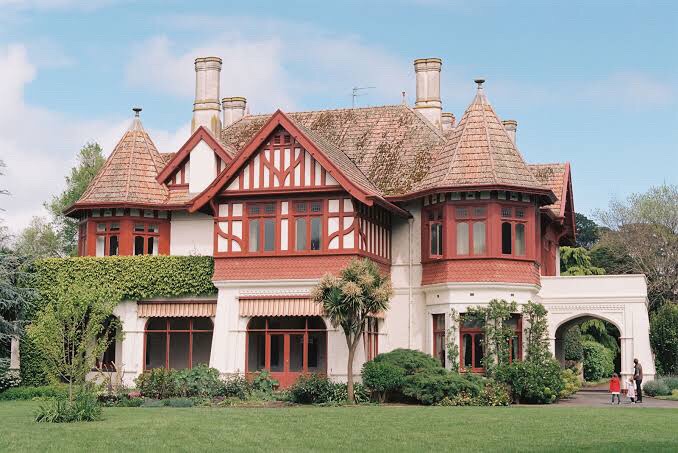