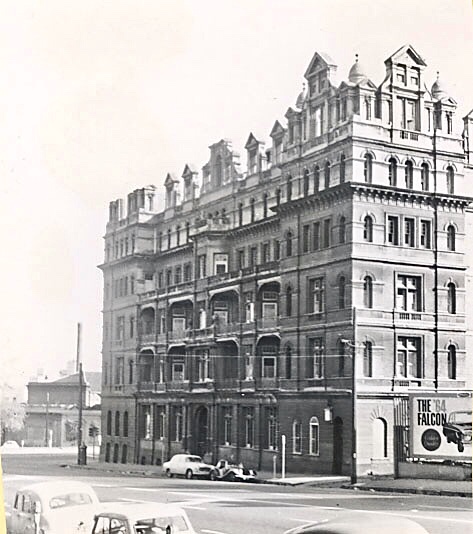 If you don’t recognise this I don’t blame you – the #QueensCoffeePalace on the corner of Victoria Street and #RathdowneStreet was there for 70 years but there aren’t many photographs.

Designed by #OakdenAddisonAndKemp in ‘German Renaissance’ style, it was built to houses guests going to the #CentennialExhibition in 1888, but never opened. It became ‘residential apartments’ instead, until it was finally sold in 1929 to the Catholic Church as St Anne’s as a girls hostel. It was demolished probably in the late 60s, and then a nice little modernist office block built in 1972, itself about to be demolished.

First image from @nationaltrustvic (possibly while being demolished), 2nd c1888 (I think someone has coloured a print from an illustrated newspaper), 3rd detail from c1910 @library_vic, 4th the same, last 1961 @cityofmelbourne, Thanks @auntyfrank for the last 3.