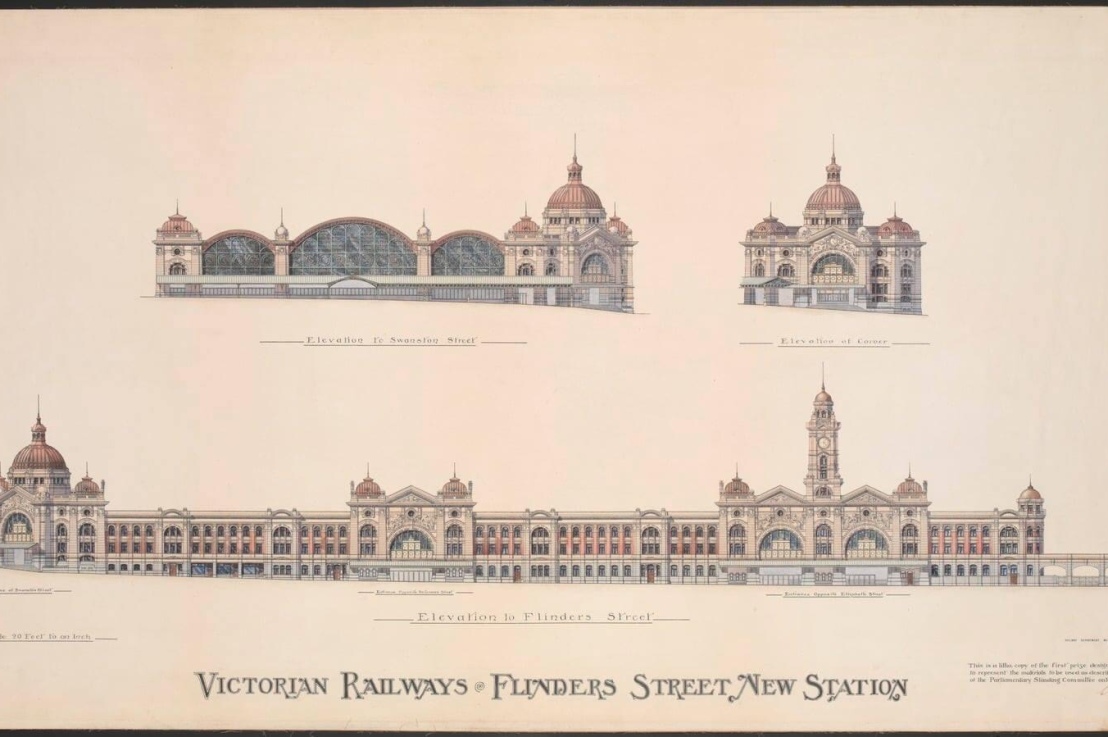 Flinders Street Station has always been a sense incomplete. The design was won in a competition in 1899 by architects Fawcett & Ashworth (who both worked for the Railways), and the State Library has their elevations, the only drawings thought to survive, which show the Flinders Street and Swanston Street sides but nothing else. The written description mentions that there was to be a roof over the platforms, consisting of corrugated iron roofed arches running across the platforms, instead of along, with a glass wall facing the river, but there are no drawings. The roof was axed in 1905 to save money before they finally started construction – but what might they have looked like ? Then I realised that the plan ‘from 1899’ in the book ‘Behind the Facade’ on the station by Jenny Davies is actually another competition drawing – it’s got the same lettering, and no architects name. And if you look closely those dotted lines over the platforms are clearly the outline of the proposed arched roofs ! They were of varying widths, and stopped along the river along a stepped line, and were somehow going to be held up on only two pairs of 4 supports on the platforms.

So I took that plan, and extrapolated from the Swanston Street elevation which shows a huge set of arched roofs on the concourse, and looked at what was actually built (e.g. platform 11 was added) and came up with an elevation. I even copied the lettering. And bits of the main building for the end on the river. I also made the concourse wider since what they built turned out too narrow, and put in more supports for the roof. I can see now why they axed it, since it would have been rather complex, since you can only support in the middle of the platforms, and the platforms are at different spacings and widths, and they curve as well, so the downs are all different. But it could have been done, and this is what it might have looked like. The green represents copper, which was used for the domes, and was intended for the fronts of the Swanston Street arches- that would have been nice.

The competition winning Swanston street elevation of 1899 shows three big arches forming a roof over the concourse, but when the budget was cut in 1905, this became a simple gable roof (mostly still there). But when I looked at the 1899 plan, I realised the enormously high and complicated roof had arches running across a relatively long and narrow space, and had it continuing over the ramps and the toilets, ending up maybe 30m high over the platforms. And there would have been a LOT of glass – too much for hot days. And it had big piers that would have required a lot of structure over the rail lines to hold them up, and inside to support the spans. Looks impressive, but no wonder they didn’t build it.

So then I started thinking about a simpler version they might have gone with – I think they would have used big cast-iron posts instead, with different spacing, so that they were above the platforms. They would probably have made them lower, and the end pavilion smaller. I have some other options before I worked out I could have three arches, but all different widths.

Then I realised the concourse roof with arches running this way extending over the platforms was a bit pointless, since it would be mainly over the toilets and shops which hang over the rail lines, and then be rather high over the platforms – so I’ve done a sort of long domed roof instead. I made the concourse twice as wide as it was originally, possibly they made it narrow to keep the ramps clear of more of the platforms, but it didn’t save much room, and it was often crowded (then they filled it with shops too, see pics from 20s-50s). I thought I’d add former windows, so it wouldn’t all be just roof (maybe in copper?), in style of course.

The concourse as it was actually built – too small, often crowded, :