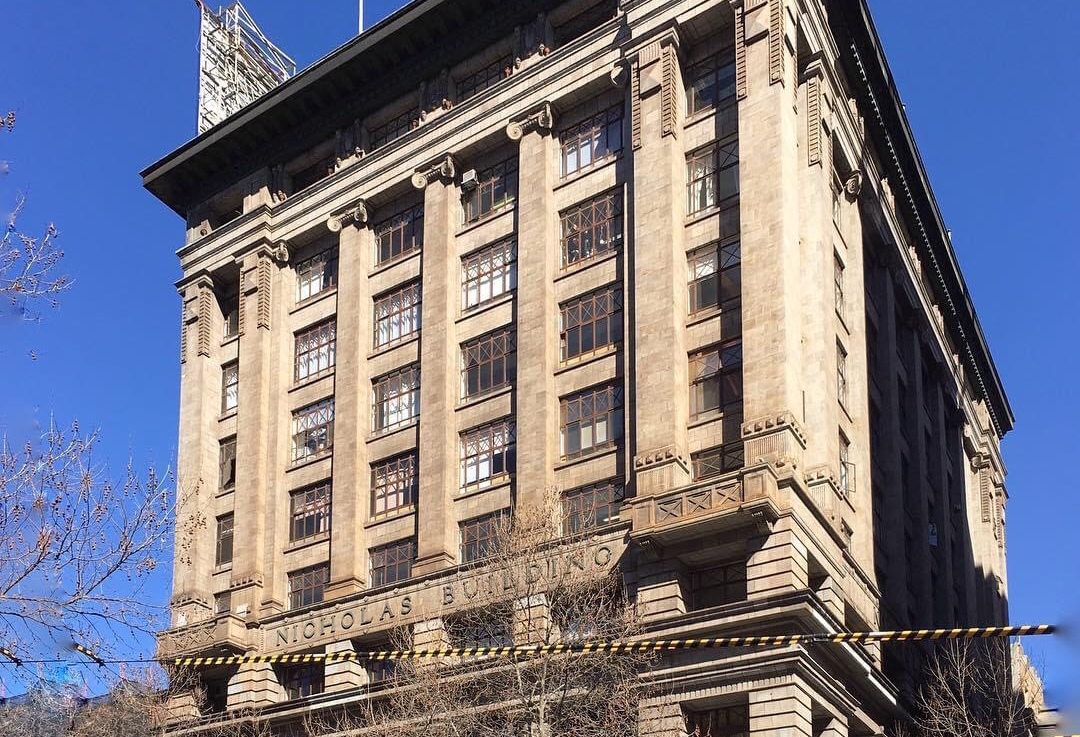 So the Nicholas Building is up for sale ! Built 1926 for the Nicholas family who made their fortune from #Aspro, and got their fave architect #HarryNorris to design it. Whoever buys it, I guess it’s likely that eventually the rents will go up (when current leases run out) and it’ll be less of a #verticallane, full of creative industries, which would be a shame. Could even conceivably become apartments. It’s currently owned by a consortium of Toorak families who’ve owned it for 30 years, and have already put rents up in recent years. The little Art Deco building on the north side demolished for the #melbournemetrotunnel is on the title (and is how there are windows on that side, not there originally) which could become a narrow 12 storey addition ? Or be added to the metro site – not sure if it was sold to them….

The #NicholasBuilding, #HarryNorris, 1926. Great example of #CommercialPalazzo as we call it, all #classical with #ionic #pilasters, a huge #cornice, cubic proportions (due to the #132ftheightlimit) and more great details at the base, all hidden by trees. A #verticallane, with artisans, artists, regtrade, specialist retailers, or maybe less so now that I hear they’ve put the rents up. Grey #faïence, a type of #terracotta, made to look like stone (but cheaper and easier !). Nicely sculpted #ioniccapitals and dcirstuon between the #attic windows. #steel framed windows. Huge cornice.

Report from CBD News in April 2021 : Up to 50 per cent of rooms in the Nicholas Building in Swanston St are empty as a result of the pandemic, according to tenants keen to see the place full of creative energy again.

“It’s half empty,” long-term tenant and gallerist Stephen McLaughlan said, who has at least survived the lockdown.

Rents were a major preoccupation during the long slow days of winter and Stephen paid his on the dot from his superannuation to make sure he kept up.

His gallery was forced to close but the efforts of the Nicholas Building Association helped, with landlords granting a rent waiver for several months, keeping up much-needed morale.

Now rents are back to normal and businesses are having to deal with the new normal, like it or not”
“I’m busier than ever,” Stephen said. “It’s a lot better than I expected. I’m not ahead in the big picture but I’m pretty lucky.”

Marc Dixon on the fifth floor also survived the pandemic but the patterns have been different for architects, with plenty of work during the lockdown but less on stream now.

“Projects are planned years in advance,” he said. “After June/July last year there were no calls.”

“Chance meetings are off. We’re only seeing people over the past three weeks,” Marc said.

There were reports that takings at Cathedral Coffee were back up to 80 per cent of pre-COVID levels and that is a measure of how full the glass really is.